Golf started for me in 1972.  I was 13 years old and my Dad introduced me to the game at a driving range in Tucson, AZ.  I remember hitting ball after ball, “clunk”, “thud”, “dirt”, “twist”, “grounder”, “chunk”, “blade” and then boom!  Out of nowhere, I hit the ball in the middle of the clubface and it seemingly soared in the air…Wow, what a feeling!  From that moment watching the first ball that flew in the air I was hooked.  The feeling of the ball coming off the clubface, the view of the ball climbing into the sky and flying true toward the 100 yard sign let me know I had found something so delightful I wanted to do it as much as I could.  Thus began a hobby that became a lifestyle and a career.

Forty years later, after a practice session on the range reviewing video of my swing, I am still delighted at the accomplishment of striking a ball clean and true…and now it is on purpose!  So what led me to this moment of truth, pure ball striking on purpose?  I searched for the majority of my golf life to replicate solid and accurate shots.  I followed the usual map, copying great player’s movements, listening to great teachers articulate body movements; constantly searching for a style that would work for me too.  Unfortunately, the more I learned about the swing styles I witnessed, the further I seemed to travel from my delightful goal of pure impact.

Then, with some wise words from Chuck Hogan one day in 2001, I realized it wasn’t HOW I swung, but WHAT the club was doing through impact that really mattered to the ball.  By this time I was steeped deeply in a method of swinging.  I was studying and teaching Natural Golf, which, at that time, was a method of swinging based on a theory of club movement on a single plane.

My philosophy for playing and teaching began to shift.  I was teaching and playing the single plane swing method.  And within this swing framework I was working toward understanding impact.  I began to understand that the single plane swing was a style, and while it was effective for many, the focus was still somehow clouded.  My focus and that of my students became wrapped around HOW to make the swing hoping it would translate to WHAT the club was doing through the impact.  There was much attention paid to setup positions, backswing motions, transition move to start the club forward, keeping the feet on the ground through impact, releasing the forearms, finishing on balance, etc.

While all of this thought of “swing” was correct and measurable in one sense, it still left awareness of impact secondary.  There was some disconnect of thought, the process was more important than the result.  Somehow, the belief is that if the swing was made correctly, the impact of the ball would take care of itself.  But it doesn’t.

Impact is a thought, awareness, a process, an intent all to itself.  Think of driving a nail with a hammer.  Do you think of wrist hinge, elbow bend, balance, weight transfer, angle retention?  Or do you simply drive the nail into the board?  When you bend a nail do you buy a copy of Hammer Digest or turn on the Hammer Channel to learn about how the best carpenters in the world hold a hammer, hinge their wrists, transfer their weight, bend their elbow?  No, you use the claw on the other end of the hammer head, pull out the “mistake”, place another nail in the hole and drive it pure and true!

These statements were validated for me in 2009 when I met Bobby Clampett, we were paired together in the final round of Champions Tour Qualifying School.  Bobby, PGA Tour player, CBS Sports golf analyst, and author of the widely acclaimed book, The Impact Zone, has launched a revolutionary new teaching and learning system based on five dynamics of proper impact outlined in his book.  Bobby’s journey in golf is an intriguing story.  You can learn about it at his website www.impactzonegolf.com. 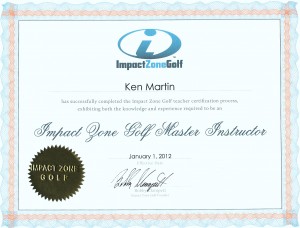 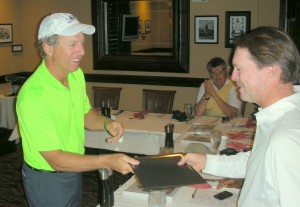 Impact awareness has liberated me from the cycle of searching for a swing style and has allowed me to focus in both playing and teaching on Mastering the Moment of Truth, The Impact Zone.  I believe it can do the same for you, allowing you to reach your potential for enjoyment playing this wonderful game.