Swinging the club on a Single Plane is an old concept.  My first exposure came back in the early 1980’s when reading Search for the Perfect Swing by Alastair Cochran and John Stobbs (copyright 1968, 2005).  As you can see in the caption for their picture below, they too approved of the concept of “single plane”. 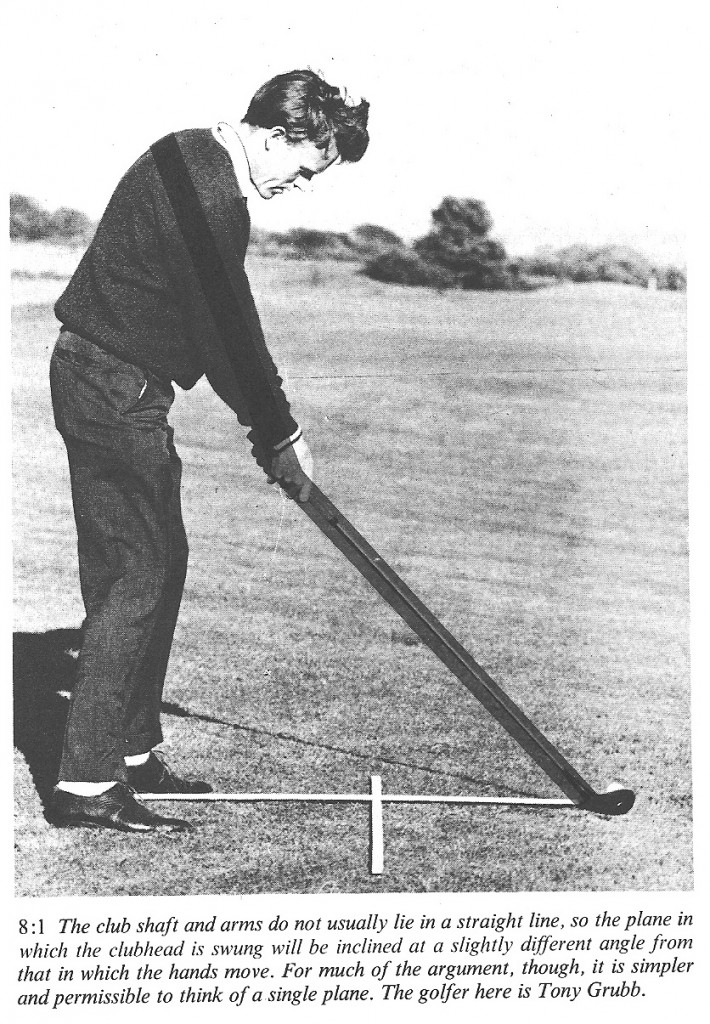 There always seems to be much writing and discussion going on in the world of golf instruction focused on Swing Plane.  I have also received many questions from Natural Golf devotees regarding Jim Hardy’s theory pertaining to his book “The Plane Truth” and if his recommended swing mechanics for the “one plane swing” apply to Natural Golfers.  This brief post will clarify my definition of on Plane so you can continue down a simple path to better golf. 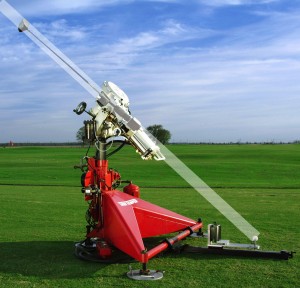 Ideally, the shaft would stay on this inclined plane throughout the entire swing; much like the shaft movement created by the golf club testing machine, Iron Byron, used by the USGA.

By starting at address with arms aligned with the club shaft, one can swing back and forward on virtually the same swing path or on a single plane. It mimics the direct strike of driving a nail with a hammer, the way one holds the tool aligns arms with handle and a single plane motion becomes the most direct motion to strike the ball. 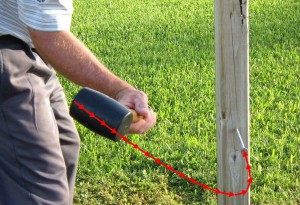 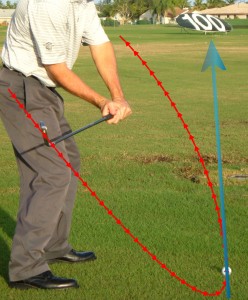 Jim Hardy defines a swing as “one plane” when the shoulders and lead arm are on the same plane at the top of the backswing. While he references a difference in setup between one and two plane swings, he does not use shaft angle at setup and impact as the criteria. Because the two methods use different criteria to define the swing plane, the swing mechanics of each method, namely Hardy and single plane, are not completely interchangeable in my opinion.

For single plane swing devotees, I recommend using a grip style that automatically aligns your arms with the club shaft at address. Simply adjust your grip position on the handle so that when swinging the club on an arc around your body with your arms you deliver the club through impact with a square clubface sending the ball to your target. If your setup is correct, you will simply have to focus your attention on the direction of the forward swing path to create a single plane swing.

Naturalness dictates that club path control is directed by the arms and hands.  When positioned in a Single Plane setup your body will move to accommodate the direction you choose to move your arms.  There will be some shoulder turn in the backswing as your arms move the club on plane and some shoulder turn in the forward swing to accommodate this same plane (swing) direction.  Your weight may transfer from trail foot to lead foot also; this inherent body motion will amplify the speed of your arm swing to increase power.  The faster you move the club with your arms the more your body will move in accommodation.  Trying to add body motion to create arm speed will almost always throw the club shaft off the single plane direction.  Think of it this way…if you want to drive a nail harder, do you try to turn your shoulders more, or drive your hips?  Probably not, at least not consciously…you simply move the hammer faster with your arm, any extra body motion occurs in accommodation of your intended arm speed.

Body motion is anticipatory to arm swing direction.  By example, if your intent is to swing your arms around your body, it follows that your body will turn to first to “carry” your arms in that direction.

It’s a lot like throwing a ball.  When you intend to throw farther, you move your arm faster and in accommodation, your body moves in anticipation and support of your intent to increase arm speed. For example, when you throw really far, you will most likely take a step in the direction of the throw just prior to accelerating your arm in that direction. The step toward the target and the body motion it entails occur because of your intent to throw far using your arm.

This simple setup can produce a simple and remarkably repeatable swing.  You can try it by holding the club so your arms align with the club shaft at setup and you will be on your way to creating the most direct strike in golf…a single plane swing.